Cars are getting more connected and autonomous driving is becoming a stronger reality. Now car manufacturers are facing the challenge of how they can trust the information that is received by each vehicle. In this perspective V2X communication will be a key factor to the success of autonomous cars.

Vehicle-to-Everything' also known as V2X refers to the passing of information from a vehicle to any entity that may affect the vehicle, and vice versa. V2X covers:

The automotive industry has worked with regulatory bodies to standardize V2X communication. The objective was to ensure interoperability between vehicle brands and with the road infrastructure so standardized messages can be managed by all stakeholders.

In most countries governments consider V2X as a key technology to reduce road fatalities. They are pushing the industry to shorten the deployment schedule for the technology. For car manufacturers, V2X, and more specifically V2V, is a milestone in the path towards fully autonomous cars.

Beside the challenge of choosing the optimum communication bearer (DSRC, C-V2X or hybrid), which keeps the industry and the mobile community very active, the security of V2X communication is also a key topic. Regulators have pointed out the need to protect the messages against fraudulent or misleading use. They also request the user’s privacy to be protected and preserved so the journey of drivers cannot be easily tracked or reconstructed by listening and compiling all messages a car sent and received in a period of time.

The principle of V2X communication security is based on signed messages using Public Key Certificates. In Europe and in the US, ETSI ITS and IEEE have both respectively defined PKI architectures to secure all V2V and V2I communications. For privacy protection purposes certificates have a fairly limited validity period and need to be changed regularly. 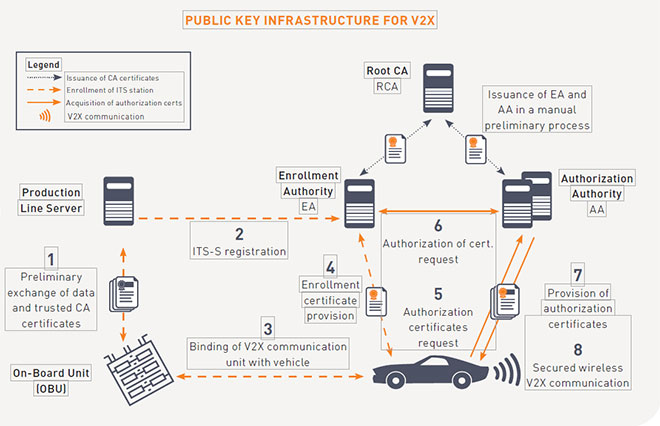 As car manufacturers are working to prepare their vehicles to comply with V2X standards, they are working on new ECUs (Electronic Control Units) that manage all the communication flow as well as fetching certificates that are required to sign messages they broadcast.

OEMs concentrate on building the V2X ECU, the backend system that is required to run the PKI infrastructure and generate certificates for their cars. This has two major challenges:

First, the certificate structure defined by ETSI-ITS and IEEE is very specific to the V2X use case and requires a complete new development. Most of existing PKI bricks cannot be reused.

Second, because of the high frequency of certificate renewals for every vehicle, the quantity and availability of the certificate generation becomes a strong constraint when building the service. With the growing number of V2X ready vehicles coming on the roads, the number of certificate fetching requests to the store will grow exponentially.